A 9/11 Reflection: We Have Forgotten 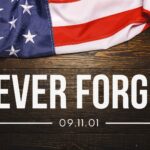