I Am a Pastor…Not a CEO 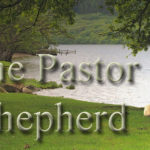