They No Longer Panted After Heaven 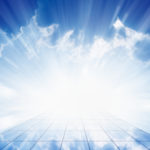