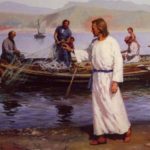 Some time ago, as I was preaching through Matthew’s gospel, I came to chapter 10. I began to study the selection of the twelve.  It is proved to be a fascinating study.  I thought this particular section, concerning their choosing, may be an encouragement or help.  It was to me.

How were these men chosen? What were their expected qualifications? As we examine this issue we are reminded of Paul’s statement in First Corinthians chapter one.

Although He is the King of Kings, the Savior did not select those who ranked among the social or political elite. Even though He is God, neither did He choose them from among the religious leadership. When selecting those who would change the course of history and impact the world, He chose the common, the ordinary, the unassuming of life. What a joy and blessing it is to know that God uses those who see themselves as unusable. He uses the humble, the despised of this world.

Even though Jesus was fully God, He was also fully man. Thus, He did not use His omniscience to call the twelve. As a man, He demonstrated the biblical process for making decisions. A careful examination of the selection process will reveal three important truths.

First, we see the principle of prayer. Luke records the events prior to the selecting of the twelve. He writes, “And it came to pass in those days, that he went out into a mountain to pray, and continued all night in prayer to God. And when it was day, he called unto him his disciples: and of them he chose twelve, whom also he named apostles” (Lk. 6:12-13, emphasis added). Before the Savior chose the twelve, He spent the night in prayer.

How often do we make poor decisions because the decision was not bathed in prayer? Jesus could have used His omniscience and simply picked the twelve. Yet, as a man, He demonstrated the importance of seeking the mind and will of God in our decision-making processes.

It has been stated that prayer is the most neglected resource of the believer. Joseph Scriven, the hymn writer, understood this neglect when he wrote, “O what peace we often forfeit, O what needless pain we bear, all because we do not carry everything to God in prayer” (What a Friend We Have in Jesus). How often are the decisions of life made with little or no prayer? Yet, in His selection of the twelve, our Lord demonstrated that absolute necessity of diligent prayer.

As Jesus walked by the seashore, He called Andrew, Peter, James and John. These men were fishermen. It was not their recreation or an occasional sport, but it was their livelihood. These men were hard workers. Commercial fishing, in the biblical era, was not equipped with the modern tools of our day. A fisherman’s life consisted of days of hard manual labor. The ships had to be put in motion by the manual pulling of the oars. Once the boat was launched into the deep water, the sails required the manual hoisting up the mast. The heavy nets required the manual tossing over the side of the boat and, when full, to be hauled back into the boat with all the weight of its catch. Their work for the day was over once the catch had been processed, the nets cleaned and mended, the boat deck cleaned, and the boat safely anchored along the shoreline.

Jesus called Matthew from his labor at the tax collectors office. Although we know little about the others, we can be assured that they were men of like purpose and passions. Jesus called those who were busy. This principle can also be found in the Old Testament. When the Lord selected a man, it was never an idle man. It was always someone who was already busy. For the first king of Israel, the Lord chose a man who was busy doing the work of find lost donkeys (1 Sam. 9). When God chose Gideon as a deliverer for Israel, he was busy threshing wheat (Judges 6:11).

Although God uses the weak and the despised, He does not use the slothful or the lazy. He choses those who are purposeful in their lives.

Finally, there is the principle of commitment. Mark’s account provides further insight into the selection process. He picks up the account after the night of prayer, as recorded by Luke. Mark writes, “And he goeth up into a mountain, and calleth unto him whom he would: and they came unto him. And he ordained twelve, that they should be with him, and that he might send them forth to preach” (Mk. 3:13-14, emphasis added).

It is in Mark’s account that we discover the qualification for being chosen by the Lord as one of His apostles. It is the willingness to commit to being with Him. Only one requirement––Be With Christ! For three-and-a-half years, these men would walk where He walked, hear what He spoke, see what He did, eat what He ate, and sleep where He slept. They would be trained by life-on-life mentorship by the Master. After they were trained, they may still be labeled as “unlearned and ignorant men,” but people would also know that “they had been with Jesus” (Acts 4:13). The ensuing mentorship program would forever change their lives, but they had to be willing to be with Him.

I remember sitting in Church Leadership class back in my college days. The professor spoke with passion and warned us aspiring pastors to “Never get close to your people. It will hurt your leadership.” The well-meaning professor was simply echoing the leadership principle of the day that said, “Let them know that you have feet of clay, but never let them see your feet.” While such a philosophy may sound good, and may be the world’s idea of leadership, it cannot be supported with biblical substance.

Jesus demonstrated that disciple training cannot be done at an arms length. Jesus drew the twelve close to Himself. These twelve were to be with Him. As stated previously, they were with Him 24/7. They saw Him when He was demonstrating His power, as in the feeding of the five-thousand (John 6). Yet, they saw Him when He was tired, as at Jacob’s Well in Samaria (John 4). They saw Him sleeping during a storm (Matt. 9:24). Although, it is not my desire to be irreverent, it is true that they even heard Him when He burped. They saw His deity and they saw His humanity.

The prevailing argument of our day is that such training is not possible because, as the old adage states, “Familiarity breeds contempt.” Yet, the life of Christ disproves that adage. The truth is that hypocrisy breeds contempt. The disciples were intimately taught and trained by the Savior and, yet, they did not develop any contempt for Him. The reason those, who get close to us, begin to contempt us is because they see our frailties and hypocrisies. Jesus had no such hypocrisies. He was consistent in all the He did.

Thus, these men were prayerfully chosen by Christ to be the ones who would eternally impact the world by the lives and ministries.   These are the men that were chosen by God to impact the world.  As stated previously, these are not the elite or the educated, but they are the called and commissioned.  These men lived over two thousand years ago and, yet, their ministry is still being felt today!

Are there other biblical principles you might add to these three?