Preaching is More Than Yelling! 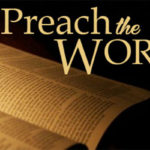 According to research done by the Barna Group and other statistical researchers, most people are biblically illiterate.  One such report revealed that only half of U.S. adults could name one of the four Gospels.  Still others (including professing believers) found it difficult to name at least four of the twelve apostles.  Albert Mohler reported that “A Barna poll indicated that at least 12 percent of adults believe that Joan of Arc was Noah’s wife. Another survey of graduating high school seniors revealed that over 50 percent thought that Sodom and Gomorrah were husband and wife.”

Yet, these same people can recite the names of all the players on their favorite sports team, and give the statistics of each player.  They can give a chronological history of each loss and victory.  They know all the NASCAR drivers by name and their car number.  They can name all the teams of the SEC.  They avidly follow their favorite players.  They can cite the many reasons that a particular football player should be the Heisman winner, and so forth.  Like the children of Reuben and Gad, they can name the places and peoples of the world but have little knowledge of the Word of God (Numbers 32:1-5, 19).

It is little wonder that so many churches have left the moorings of biblical truth and set sail on the seas of compromise and man’s opinion.  The modern church bears little resemblance to the one found within the pages of the New Testament.  While I am grateful for those who approach the services of the church with anticipation, they are the few among professing believers.  As you gather around the entrances of the local church on Sunday morning, give attention to the discussions taking place.  Yesterday’s games, races or other competitions are the top topics.  It seems that the gathering of the local church is a mere religious club, where the participants have little vested interest in what happens.  Where are the believers that are passionate and eager to hear from God?  Where are the congregants who approach the service with hungering hearts and thirsty souls, that can only be quenched with drinking deep from the well of God’s Word?

Sadly, most of the responsibility can be laid at the feet of the local church pastor.  Too many pulpits have been replaced with counselor’s stools and motivational lecterns.  The “message from God” has been replaced with “thought for the week.”  Expositional preaching has been replaced with a topic of the day.  Little preparation is given to the average sermon today.  Several years ago, a preacher told me, “I don’t have to study much anymore.  Give me a text of Scripture and fifteen minutes, and I can get a message ready.”  Needless to say, that man should never stand in the pulpit.  Shallow preparation produces shallow preaching that produces shallow Christians.  Yet, a visit to the average preacher’s fellowship will reveal the same attitude, even it is not so bluntly stated.  I have often sat in meetings where the preacher announced his text, read the text, and from there departed.  In one such meeting, I heard a preacher give a wonderful motivational speech on how to succeed in life, but it could not properly be called a biblical message, because it had nothing to do with the text that he read in Romans 7:18-20.  Such mishandling of the Scriptures is a flagrant violation of the command of God to “Study to shew thyself approved unto God, a workman that needed not to be ashamed, rightly dividing the word of truth” (2 Timothy 2:15).  It is utter disregard for the biblical exhortation for the pastor to “Feed the flock of God” (2 Peter 5:2).  The pastor/shepherd should remember that it is obedience to that specific command that will yield the “crown of glory that fadeth not away” (2 Peter 5:4).

It is amazing what is called “preaching.”  In many circles, a man can yell loud, spit far, pound the pulpit hard, and people declare “now that’s preaching!”  It will not matter that Scripture was not expounded, or that a text had been yanked from its context.  As long as the supposed preacher declares it forcibly and passionately, then that is “preachin’.”

Please note that it is not the purpose of this article to attack those who faithfully proclaim God’s Word.  Yet, it must be understood that we cannot expect mature believers to be developed when there is not a systematic exposition of God’s Word taking place.  It is no wonder that we have so many “growling” members in our churches when the man in the pulpit does little more than throw them an old bone with no meat, as he would toss a bone to a dog.

What we need in our day are men who will devote themselves to “continually to prayer, and to the ministry of the word” (Acts 6:4).  We need men who will faithfully teach the Word of God in a line-upon-line, precept-upon-precept method (Isaiah 28:9-10).

The call to preach is the greatest of all callings!  Let those of us, who mount the pulpits of God’s church, be men of God who have labored in the Word of God, been filled with the Spirit of God, and then faithfully preach to the people of God the Word of God.  Paul did not tell Timothy to “Preach about the Word.”  He said, “Preach the word” (2 Timothy 4:2).  To do so takes time in prayer and time in study.  If we will do that, then our ministries can have both depth and breadth.  We will discover that the true believers, as hungry sheep, will gather to be fed the Word of God. Therefore, Preach the Word!

Is the expositional, line upon line, the style of preaching you use?  What are your thoughts?