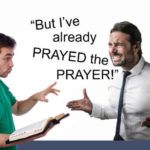 Does saying a prayer produce salvation?  If I say, “Lord, I know I am a sinner and I believe you died for my sins, and I want you to save me,” does that save me?  I realize that I am treading upon ground that can be very volatile and, yet, this is an issue that must be addressed among those who care about the souls of men.

It is my belief that my early ministry left many people more lost than I found them.  As I would go out door-knocking, I would apply the principles I had been taught in soul-winning class.  You know the drill. . .Knock the door. . .slide your foot into the door opening so they could not close it again. . .lead them down the Roman’s Road. . .and, ultimately, lead them in the Sinner’s Prayer.  The number of people that I lead through the “Sinner’s Prayer” is many.  Yet, they did not experience the changed life that Second Corinthians 5:17 speaks of.  They never darkened the door of the church.  They never forsook their wicked lifestyles.  Yet, if you asked them today if they were saved, they would probably say, “Yes I am. . .I prayed a prayer years ago when a preacher came by.”  Thus, they were left more lost than I had found them.

The problem is that the “Sinner’s Prayer” has become nothing more than a Baptist Rosary.

I know a man that had such an experience.  Yet, his lifestyle of drunkenness and immorality are clear evidences that he has not be saved.  However, he insist that he has “done all I know to do!”  He is depending on a day when, after hearing J. Harold Smith preach “God’s Three Deadlines,” he went forward and said a prayer.  Like so many, he is depending on a day when he “said a prayer.”  Oh, that he would realize that saying a sentence of words is not salvation.  How many people, who “said a prayer,” will find themselves being sentenced to eternal damnation?  Oh, that people would realize that one must come to Christ, by faith alone.  Too many have made the “Sinner’s Prayer” nothing more that the Baptist Rosary.  If praying prayers saved a person, then a faithful Catholic person would assuredly be saved.  Yet, it is not mere mouth confession that produces salvation (James 2:17-18).  Salvation begins within the heart, and then proceeds to the confession of the mouth (Romans 10:10).  I pray for this man’s salvation.

The problem is that the “Sinner’s Prayer” has become nothing more than a Baptist Rosary.  To have a sinner “pray,” when there has been no conviction, is unbiblical.  Salvation is not merely an mental acceptance of the facts of salvation (cf. James 2:19).  Satan believes that Jesus is the Son of God, and that He died and rose again.  Satan was there when it all happened.  Yet, Satan will not ever be saved, even though he mentally agrees with the facts.  There must be a conviction of one’s lost and sinful condition, before they will ever believe on the Lord Jesus Christ.

Therefore, we must get back to presenting the gospel of the death, burial and resurrection of Christ, as Paul set forth in First Corinthians 15:1-6.  It is this gospel that will produce conviction in the hearts of sinful men, and then genuine confession and conversion will take place.  When the man who is convicted of his sinful state prays,  it will be his prayer to God, and not a rote “Sinner’s Prayer.”  It will be from his heart and not merely his mouth.

What are your thoughts on this issue?  Please feel free to comment below.