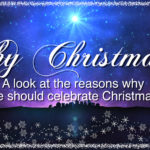 Reasons it is biblical to celebrate Christ’s birth…

Social media has created a venue in which thoughts, ideas, philosophies and more may be freely exchanged.  That can be a good and powerful tool for society.  However, it can also be used in a negative and destructive way.  One example of such is the attack on the Christmas celebration each year.  The attack does not come from the non-believers, but from well-meaning believers.  They believe that the celebration of Christmas as the occasion of Christ’s birth is anti-Christian and unbiblical.  Why?  Because some have misused certain passages of the Scriptures while ignoring other passages.

Personally, I believe it is biblical and right to honor and celebrate the birth of Christ.  As such, I believe the December 25 is as good a day as any.  I understand that the world has turned Christmas into a marketing hey-day.  I understand that the world has taken the historically charitable work of a historic man, named Nicholas, to fabricate the story of Santa Claus and he has the omnipotence of God (i.e., “He knows when you are sleeping, he knows when you’re awake…so be good for goodness sake”).

Yes, I am aware of the probability that December 25 is not the most likely date of Christ’s birth. Yet, I do agree with Daniel Wallace (Dallas Theological Seminary) when he wrote, “Now, of course, we can’t be absolutely certain of the day of Christ’s birth. At least, not this side of heaven. But an early winter date seems as reasonable a guess as any. And December 25th has been the frontrunner for eighteen centuries. Without more evidence, there seems to be no good reason to change the celebration date now.”

Yes, I am also aware that the term “Christmas” is Roman Catholic in origin.  Because of that, there are some who believe that Christmas should not be observed.  However, I would argue that the term has greatly changed since its origin.  As Christmas made its way into the non-Catholic world, the term lost the significance of “Christ Mass.”  In all my years, I have not know of anyone connecting Christmas with the Catholic Mass.  I would propose that the term, to the general public and non-Catholic church, means nothing more than identifying the day we honor and celebrate the birth of Christ.

In spite of all of the above, I do believe the hijacking of a worthy celebration by the world does not mean that Christians should abandon the practice.  Therefore, I offer the following biblical reasons why it is right to honor and celebrate the birth of Christ.

Obviously, God thought the pending incarnate birth of His Son was worthy of recording as a prophecy hundreds of years in advance of that event.  Then, in Daniel 9, He ensures that all the world would know the exact timing of His Son’s birth and in Micah 5 He provided the exact location of the birth.

2. The Scriptures bear record of His birth (Matthew & Luke).

Both Matthew and Luke give many details concerning the birth of Christ.  If it were not important in the mind of God, then why bother recording it.

3. The angels heralded His birth (Luke 2)

On the night Christ was born, God dispatched a host of angels to herald the news to a world lying in darkness.  After 400 years of silence from Heaven (between the Old Testament and New Testament), the angels proclaim the Good News of Christ’s birth!

4. The wise men sought out His birth

God ordained that the Magi would follow a divinely appointed star, so that they might worship the One who was “born King.”

5. The angel, Gabriel, announced His birth

God ordained that one of Heaven’s high-ranking angels be dispatched to tell the tells of Christ’s pending birth to Mary.

Christ’s birth was so important that God sent a forerunner to prepare the way for the Christ.

7. The Plan of Salvation required His birth

Therefore, based on the above, I believe it is biblical and right.  I might also add that God used the incarnate birth of His Son to Christian the calendars of the world.  Until recently, all dates were designated as either B.C. (Before Christ), or Anno Domini (Year of Our Lord), and those two designations were separated by Christ’s birth.  Recently, those who reject Christ, have changed the designations to B.C.E. (Before the Common Era) and C.E. (Common Era).  Yet, as Romans 1:22 so aptly states, “Professing themselves to be wise, they became fools,” because the birth of Christ is still the definitive separation point for the two eras.

So, there you have it…My thoughts and opinion!

What do you say?